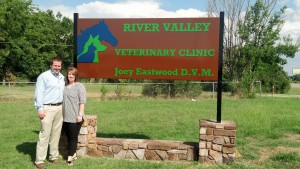 Having been raised up on a farm just 30 minutes west of Hugo, Dr. Eastwood began early with his love and compassion for animals that has led him to the profession he currently enjoys.

He attended SOSU in Durant for two years majoring in Chemistry and later transferred to OSU to finish his undergraduate studies. Later he was accepted and graduated from Oklahoma State University in 2011 as a Doctor of Veterinary Medicine. Along the way, he had externships in: Uvalde, Texas – mixed animal practice, Boswell, Oklahoma – mixed animal practice, Paris, Texas- mixed animal practice, and Weatherford, Texas, equine practice.  He then began practicing in Paris, Texas for two years before he and wife Sarah formed River Valley Veterinary Clinic.  Dr. Eastwood, professionally, enjoys internal medicine, orthopedic surgery, lameness, and soft tissue surgery.